In 2005, the North Bay Professional Paramedics Association and the District of Nipissing Social Services Administration Board teamed up to launch an exciting and life saving initiative in the Nipissing District.

On November 21, 2005, NHL star Yuri Fisher collapsed on the bench during an NHL game; there was a public call for all arenas to be equipped with public access defibrillators. In North Bay, the project was already well under way and all eight community centres in the district were being equipped.

The goal of the project, entitled “Lifeline – Every Minute is a Lifetime”, was to place public access defibrillators (PADs) in eight community centres in the Nipissing District, which include North Bay, Astorville, Temagami, Mattawa, Sturgeon Falls and Verner.

Fundraising continues and to date 140 locations (updated December 2018) have been equipped under the Lifeline Project with the grateful assistance of several local sponsors, The Heart & Stroke Foundation of Ontario and the Heart & Stroke Chase McEachern Tribute Fund. All supporters are listed on the sponsor’s page.

The NBPPA purchases the PAD for each location, trains the employees on it’s use and teams up with the DNSSAB and 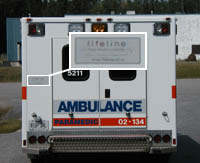 local EMS for long term maintenance of the units. The installation of the PADs, purchased through a local company, HeartZAP Services Inc, includes a two stage alarm process. The PADs are mounted in a metal cabinet and when the cabinet door is opened, an audible alarm and red light are activated. The alarm is two fold, as it warns others that there is a medical emergency in the vicinity and it deters vandalism. Once the PAD unit is removed from the case, a second alarm is activated at the True Steel alarm monitoring station and the Emergency Services are contacted immediately. The NBPPA still advises the public to call 911 in an emergency, which provides additional information to the responding emergency personnel including the exact location of the patient.

The Lifeline project is unique in that it is the first PAD project that relies solely on fundraising. Other PAD projects are city funded. 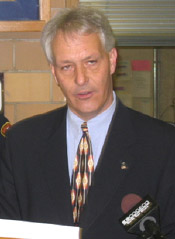 Peter Chirico (right) knows the heartbreak heart attacks can cause.

Chirico’s father Dr. Frank Chirico died of a heart attack at 42, leaving his 39-year-old wife to care for 12 children.

That’s the reason Chirico didn’t think twice about becoming the champion of the fundraising program aimed at purchasing portable defibrillators for the Nipissing District.

The program is credited with nine successful cardiac arrest saves and is highly regarded by the Ontario Heart & Stroke Foundation.

The NBPPA is a registered charity and tax receipts are issued for each donation. For further information on the project and how to donate see the contact page on this site.